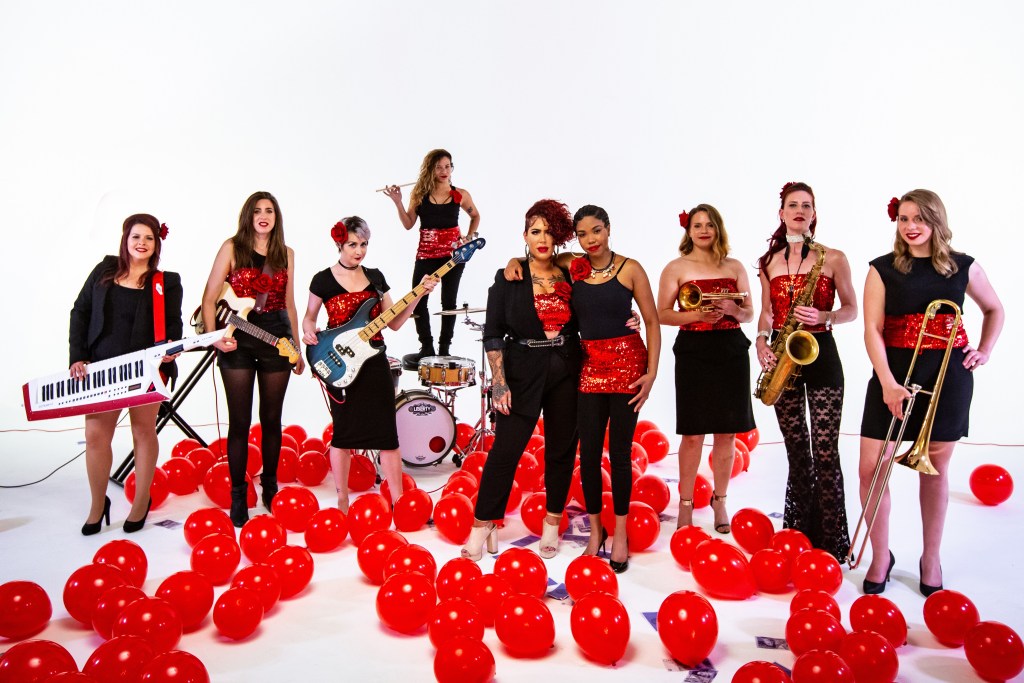 Soul City are a stunning all female collective of London’s top musicians from the session and entertainment industry.

Whether its current chart toppers you are after, hits from the 90s, 70s disco classics or a bit of everything to please a varied crowd, Soul City will wow your guests and most importantly keep them on the dancefloor!

Soul City’s sets are fun, personal and interactive, involving guests of all ages with a dance off or even a singalong down the mic if your’e feeling brave!

Soul City put their 100% happy client rating down to working personally with each client to ensure that the product they deliver is bespoke, meeting their client’s personal vision of a perfect event.

Soul City’s most popular product is their party band, available from a 4 piece upto a 12 piece including a funky horn section, giving you flexibility and working within your budget and venue space.

One of the most versatile bands in the function industry, their extenive repertoire includes a Christmas setlist of singalong carols as well as upbeat festive tunes.

They are also a popular choice for Bar/Batmitvahs and Jewish weddings, with upbeat extended versions of traditional Israeli songs, and also male singers available on request.

Soul City have a sister band Jazz City, who ‘s authentic renditions of Jazz standards are popular at celebrity parties and are the perfect way to start off an evening, available from a duo up to full band lineup.

Being a collective means they can cherry pick the musicians who specialize in the music specific to your personal taste, and have add ons available including beautiful solo piano sets, duos and DJs.

The Soul City DJs are a cut above the rest, incorporating live elements (such as percussion, keyboards and saxophone) into their DJ sets, which are popular at the Brit Awards after parties.

Soul City’s ability to provide an outstanding entertainment package which caters for each stage of your private or corporate event has made them a huge hit in the function market, ensuring their happy clients (such as Amazon, BBC, Betfred, FA Cup, Geri Halliwell, ITV, Mary Portas, Stylist Magazine, The Sun and The Daily Telegraph to name but a few) keep coming back to them year after year.

It includes (but is by no means limited to) the following:

Soul City: Magical, engaging, musical, empowering and super-funky. That sums up this powerhouse group. They own the space and then some. Always smiling, they engage immediately with their audience. Simply put, these girls rock

“We both had the most fantastic time and you guys were great! I have since been giving your details out to many of our guests.
Everyone commented on how brilliant you all were and the fantastic range of music that you played, which suited our wedding just perfectly. Thanks girls! “

What a wonderful group Soul City is! Your performance at our wedding was everything we could have hoped for & more. We loved your choice of music – you had obviously put a lot of thought into what we would like – and the way you played & sang with such flair & enthusiasm.

We heard many compliments & positive comments from our guests, they obviously enjoyed it as much as we did. Thank you all for helping to make the day such a memorable one!

With thanks & best wishes
Stuart James

From the moment we started talking to Rosa about planning the music for our daughter’s Batmitzvah we knew we could work well together and rely on her expertise in pulling the musical side of the event together, tailored to our needs and meeting our vision of how we wanted the party to be. Soul City band pulled off an amazing coup. They sang and played the Jewish dancing songs – traditional for a Batmitzvah – as well as contemporary pop and disco songs that kept the dance floor thronging and our guests – both kids and adults – joyously dancing and wanting more.

We started with a lovely solo piano set during the reception, then a series of live band sets playing Jewish songs, background chill-out during the meal and then brilliant disco sets. Before the last band set of the night, we also had a DJ set to bring a different flavour to the evenings proceedings. Soul City were absolutely fantastic, bringing quality, style, variety and personality to our celebration and making it so special for us, our daughter and our guests. The feedback has been great. We’d definitely recommend Rosa and the band to anyone thinking about throwing a lively party, especially a Bar/Batmitzvah!–